"Let Them Fall in Love" by Cece Winans 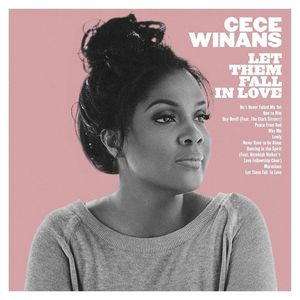 I was three years late to the party. Fortunately, the music’s still going on.

Let Them Fall in Love (2017) was Cece Winans’s first full length studio album in ten years. Her career as a gospel singer had been long established, of course, with eight Grammy awards and induction into the Gospel Music Hall of Fame. But the last time I had personally noticed her work was childhood, when the CD changer in my family’s living room cycled through the records she made with her brother Bebe Winans.

So when Andrew Osenga said this recent release was “easily” his favorite album from the last five years, it was time to hear it for myself.

Before I heard it twice I had already told five other people about it.

Musically, it’s something of a throwback album; the descriptor “Motown” is all over other reviews. But as others have observed, it synthesizes some diverse strands: besides the retro Motown feel, there’s gospel Pentecostalism and even a cover of Kris Kristofferson’s country staple, “Why Me?”*

Altogether the record is an upbeat, robust departure from the smoother, breathier sound Cece is known for. After years of listening to a good deal of indie pop-alternative music, I was reminded that Cece’s vocal skill is simply in a class of its own.

But that observation comes after reflection. The first thing that struck me about the album was not her voice or the arrangements. It was the lyric. The words went straight to my heart. And I think it was because the words, though capable of summoning many kinds of people, were words for a church kid like me. That’s because they were mostly written by a church kid--Cece’s son, Alvin Love III.

Alvin grew up embedded in church life, yet after college he felt the need to discover himself apart from his family and faith. He went to the farthest English-speaking city he could think of—from Nashville to Melbourne, Australia—where his folks didn’t know anybody who could hook him into church meetings.

But Melbourne wasn’t too far for the Spirit, and in a Melbourne church on his first morning in Australia his heart was revived to the Lord. He carried that revival back to Nashville and in a short period of time wrote the songs now on this album. He’s told the story many times, but I heard it only recently on Andrew Osenga’s Pivot podcast.

Alvin Love is a Grammy-winning songwriter and producer, a co-founder and pastor of Nashville Life Church, and an all around pretty incredible guy. This was honestly one of the most fun and exciting conversations I’ve had in a long time. I first really heard of Alvin because of a record that he wrote and produced for his mother, legendary gospel artist CeCe Winans. The album is called “Let Them Fall In Love” and it’s easily my favorite record of the last five years. We started working together a few years ago when his church’s worship band, Nashville Life Music, signed to Integrity Music. Once I got to know Alvin and his church community I learned that what I love in all that music is simply a natural outpouring of what has been going on at the church. And as you’ll hear, ALL of that began with this incredible story of Alvin’s. This is one of my favorite episodes ever.

The first track is my personal favorite: “He’s Never Failed Me Yet.”

When I was a child, I did childish things
My life was church and all it brings
I'd always hear the old folks sing
"He's never failed me yet!" …

I want to expand on how these words fit me as a church kid. But it’s almost 7:30 a.m., my son is awake, and I’ve run out of time to write an autobiography. I’ll just highlight a few more songs. Then you just need to listen to the whole thing yourself.

I heard of His name in stories
And Sunday song

Finally, the title cut, “Let Them Fall in Love.” Let who fall in love?

The heart of this song is beautiful. It’s an earnest plea from love for friends and neighbors to know the living God. This longing can be a hard one for church kids. We can feel rational pressure to share the gospel; we mentally understand its importance; but we can get over focused on how weird we already are. To close the album with this wonderful prayer is a wonderful reset.

If you haven't heard this record before, I hope it blesses at least a few of you.

*Cece’s cover reminded my dad of his dropped-out-of-college-running-from-God days. He first heard “Why Me?” in that time of life on a diner jukebox. He would play it every time he went there.