"My theory was first to reach every heart by simple, stirring music." 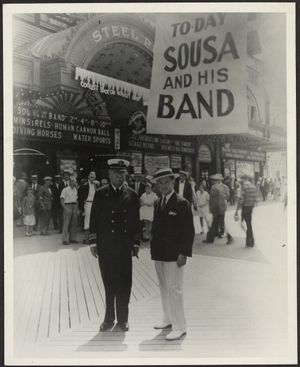 John Philip Sousa was enormously successful, and it’s not just because of the quality of his music. He understood how to deliver music to people where they already were.

1. He wrote and conducted for a medium that reached a lot of people. As a student, Sousa was electrified by light opera. But though he did write several operettas, his career embraced a production type that was much more familiar to the average American town: the brass band. According to Tom Spain, “Most citizens received their first, and in many cases, only exposure to the music of Mozart, Beethoven, Rossini, and Verdi from a town band or a touring concert band.”

2. His music joined a conversation his listeners were already having. Many of his works are branded with self-explanatory names that Americans could immediately relate to. A march called The Washington Post - another one, Boy Scouts of America - a tone poem called The Chariot Race for when Ben-Hur was popular. His performance programs always used popular tunes, too. “The audience at big out-door concerts is composed largely of the masses,” he said in an interview. “They don't care for what some folks are pleased to call classical music.... I have always believed in playing airs that I found everybody likes."

3. But he used what was familiar as a bridge to a more elevated style. His highly disciplined band performed far more powerfully than a typical local band. The wind section of the band was more prominent, too, and altogether the Sousa Band approximated the sophistication of an orchestra. His programs intertwined great classical works with the popular tunes.

4. He literally brought his music to people on a large scale with live performances. He didn’t just rely on local bands and newspaper critics to get his music. He showed them how it could be done with his own tours, for many years moving his sixty-piece band in trains all over America and Europe. He led something like 15,000 performances in his lifetime.

Discussions of art sometimes incline toward self-expression. But someone who wants their output to impact the world should consider how the world is positioned to receive it. What speaks to people? How can listeners most easily access what the artist has to give? These questions don’t aim at selling out on “good art” for the sake of commercialism. Rather, they’re meant to encourage artists to understand and serve their listeners, like Sousa did.

"Tunes--real tunes, good honest tunes--that is what the public demands, and with absolute right."

“My theory was first to reach every heart by simple, stirring music; secondly, to lift the unmusical mind to a still higher form of musical art. This was my mission. The point was to move all America, while busied in its various pursuits, by the power of direct and simple music. I wanted to make music for the people, a music to be grasped at once.”

“No man need get the ‘big head’ over success attained. He is not responsible for all of it, for the Almighty and the world are partners in the success of every man. My warning always is, ‘Beware of the Big Head.’”

“My years in Washington had taught me that if you wish to see the President, see his wife first.”

“Composers are the only people who can hear good music above bad sounds. The average music-lover hears only the production under prevailing conditions.”

“To a great extent I have my parents to thank for my success and achievements, for they unlike many parents humored my boyish ambitions and helped me to take for a life profession that which I longed for as a kid.”

After the failure of an early operetta: “I went to my hotel disillusioned and disconsolate. I examined myself and could only see that I was a colossal failure as a composer, as a dramatist, and as a man. I buried my head in the pillow. If ever a man berated himself as the smallest and most insignificant specimen of the human race, I did that night.”

"The greatest thing and the most beautiful thing about this great American nation is its home life.”